Upon coming together as a team for the first time during the 2014-2015 LVI program, the members of “Team B.E.A.R” (Balance, Efficiency, Accountability, Respect) determined that they wanted to support a community organization that made a positive impact in the lives of kids, their families and the community at large. Fueled by the positive impact that one particular organization has had on the lives on one team member and her family, the team decided to partner with the Nanaimo Child Development Centre – a non-profit facility that provides critical support, clinical assessment, and therapeutic services to nearly 1,800 children with developmental needs and their families on Central Vancouver Island each year.

The team’s goal was to increase awareness of the NCDC in order to promote additional community support and funding, which in turn would help the NCDC decrease the amount of children on their waitlist while creating even better experiences for the children and families who spent time there. With input from the organization’s team and the help of several generous sponsors, Team B.E.A.R planned and executed an exterior makeover of the NCDC to increase its visibility in the community and enhance its visual and emotional appeal as a child- focussed facility. 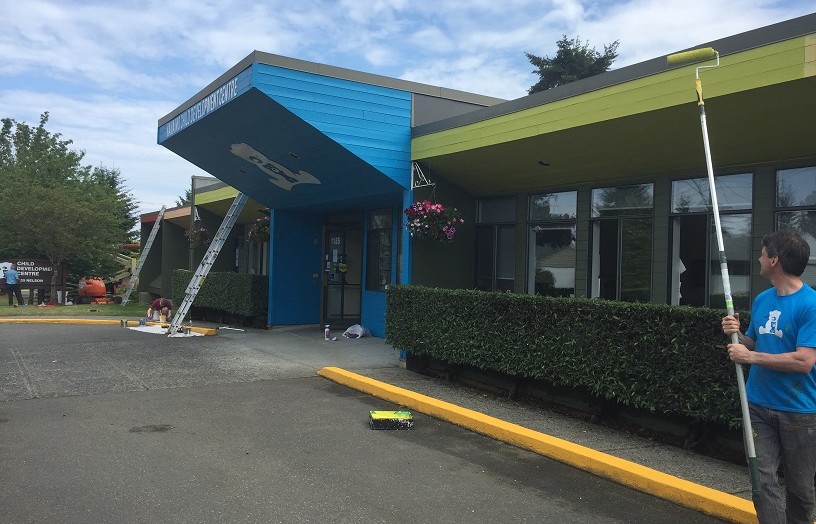 This project included raising the funds, supplies, and human resources needed to (1) paint the exterior of the building with fun, child-friendly colours, (2) purchase and install a new awning, (3) commission a professionally-painted mural in the shape of the NCDC’s brand new bear logo, and (4) cut and prime 200 small wooden bears for kids to colour and affix to the NCDC’s playground fence. After 8 months of planning and organizing, Team B.E.A.R. revealed the completed makeover project at the NCDC’s annual family BBQ on May 24th, drawing attention from local media and various community leaders and leaving a lasting legacy between Leadership Vancouver Island and the Nanaimo Child Development Centre.

In addition to recognizing the efforts of numerous volunteers and donors who made the project possible, Team B.E.A.R. would like to give special thanks to Kirkbride Painting, Coastal Community Credit Union, Young Professionals of Nanaimo, Home Hardware, United Rentals, Iron Oxide Art Supplies, Western Forest Products, Gyro Club of Nanaimo, Lions Club of Nanaimo, the Blanchard Family and Industrial Plastics and Paints for their generous donations.